Blocks of trials and counterbalancing¶

Many people ask how to create blocks of trials, how to randomise them, and how to counterbalance their order. This isn’t all that hard, although it does require a bit of thinking!

The key thing to understand is that you should not create different Routines for different trials in your blocks (if at all possible). Try to define your trials with a single Routine. For instance, let’s imagine you’re trying to create an experiment that presents a block of pictures of houses or a block of faces. It would be tempting to create a Routine called presentFace and another called presentHouse but you actually want just one called presentStim (or just trial) and then set that to differ as needed across different stimuli.

This example is included in the Builder demos, as of PsychoPy® 1.85, as “images_blocks”.

You can add a loop around your trials, as normal, to control the trials within a block (e.g. randomly selecting a number of images) but then you will have a second loop around this to define how the blocks change. You can also have additional Routines like something to inform participants that the next block is about to start.

So, how do you get the block to change from one set of images to another? To do this create three spreadsheets, one for each block, determining the filenames within that block, and then another to control which block is being used: 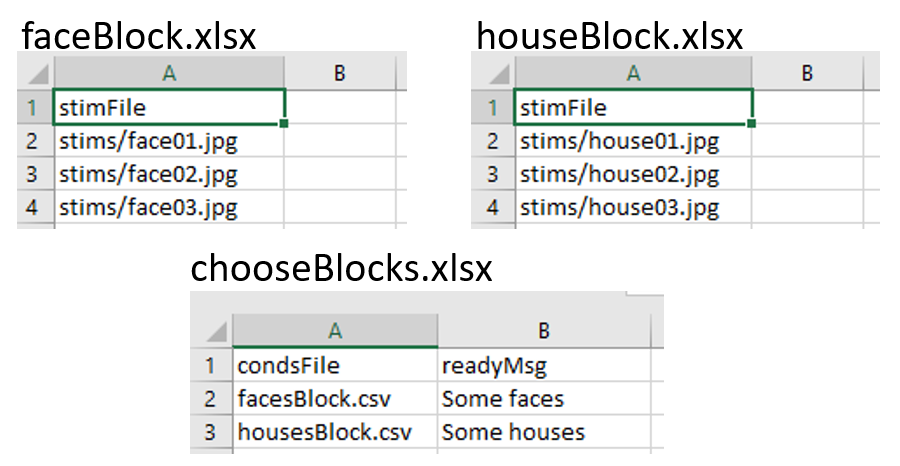 Setting up the basic conditions. The facesBlock, and housesBlock, files look more like your usual conditions files. In this example we can just use a variable stimFile with values like stims/face01.jpg and stims/face02.jpg while the housesBlock file has stims/house01.jpg and stims/house02.jpg. In a real experiment you’d probably also have response keys andsuchlike as well.

So, how to switch between these files? That’s the trick and that’s what the other file is used for. In the chooseBlocks.xlsx file you set up a variable called something like condsFile and that has values of facesBlock.xlsx and housesBlock.xlsx. In the outer (blocks) loop you set up the conditions file to be chooseBlocks.xlsx which creates a variable condsFile. Then, in the inner (trials) loop you set the conditions file not to be any file directly but simply $condsFile. Now, when PsychoPy® starts this loop it will find the current value of condsFile and insert the appropriate thing, which will be the name of an conditions file and we’re away!

Your chooseBlocks.xlsx can contain other values as well, such as useful identifiers. In this demo you could add a value readyText that says “Ready for some houses”, and “Ready for some faces” and use this in your get ready Routine.

Now we need to create further conditions files, to specify the exact orders we want, so we’d have something like chooseBlockA.xlsx and chooseBlockB.xlsx:

The last part of the puzzle is how to assign participants to groups. For this you could write a Code Component that would generate a variable for you (if…..: groupFile = “groupB.xlsx”) but the easiest thing is probably that you, the experimenter, chooses this using the GUI we present at the start of the experiment. So, we add a field to our GUI using experiment settings: 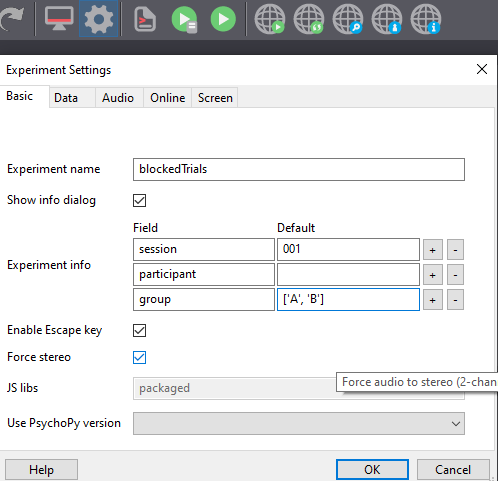 Note that entering a list as the default input will present us with a dropdown in our GUI.

Finally, we set parameters of our blocks loop to use the method ‘sequential’ (because we are using a predefined order) and we enter the following into the conditions field: ` $"chooseBlocks"+expInfo['group']+".xlsx" ` This will concatenate the string “chooseBlocks” with our selected group (“A” or “B”) and the required file extension (in this case “xlsx”) in order to select the correct order.

Even though our outer loop is now sequential, your inner loop still probably wants to be random (to shuffle the image order within a block).

The above example is useful when we have multiple blocks where the routines we present would be largely similar (i.e. both blocks present an image component), but what about situations where we have totally different tasks we need to counterbalance (e.g. an auditory stroop and an n-back task). The following method is an extension of the logic used in the ‘branchedExp’ demo available in PsychoPy® builderview. You can download a working version of the example we will work through.

The loop surrounding each task will look something like this (although here I have stripped the parameters to the bare minimum, you will likely have a conditions file):

For our outer loop we will use conditions files that look something like this:

Just like before we create a field in our experiment settings called group (but let’s say that the group names this time are ‘ABCD’, ‘BCDA’ and so on where the content of the conditions file differs). Finally, we use the following parameters for our outermost loop to select which, preordered, conditions file we are using. 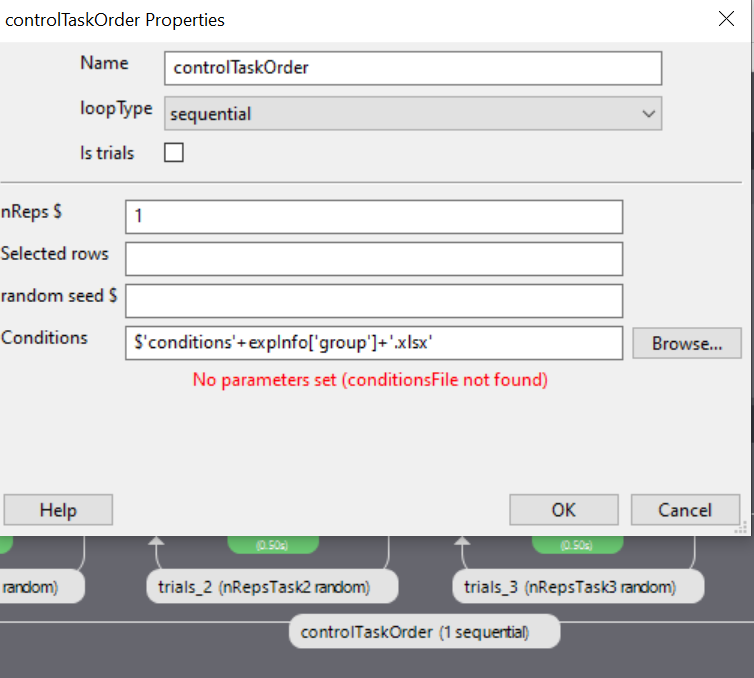 Using this method, we could present several subtasks in a counterbalanced order (without having to create new experiment files for each order!).

What about going online ? Well, things are more difficult there, but not impossible let’s talk about Counterbalancing online